Donal Curtin has an interesting post up (responding to a talk I gave), in which he looks at whether large income gaps lead to lower social mobility.

He presents a version of the graph below (where unequal countries have high ‘generational earnings elasticity’, i.e. a strong link between parents’ income and the income of their kids), and says:

What you get is an overall pattern where the more unequal countries tend to be the less intergenerationally mobile. 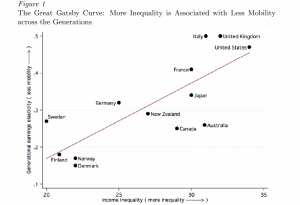 So much is uncontroversial. He then adds:

There are those who would make a strong argument from this graph – that it’s the inequality that is causing the lack of mobility, and in turn that would tend to take you down a policy route emphasising redistributive policy.

I don’t think that’s necessarily true: I’m rather inclined to view both these outcomes (inequality and immobility) as caused by a third factor again, namely the social and economic openness of a society. In the UK you’ve got the class system; in much of continental Europe you’ve got insider/outsider labour markets. I’d still be tempted to bang away at those sorts of barriers to equality of opportunity: as far as I’m concerned, you can jack up the progressivity of the income tax system all you like, but it’s not going to make a blind bit of difference to the career prospects of the young Arab girl in a French slum.

This is an interesting point, and I’d be very curious to see some kind of analysis that compares a measure of “openness” (whatever that would be) with income inequality to see which of them has a stronger influence on social mobility.

Just looking at the countries, however, I’m not sure that openness explains things. If you concentrate on the developed countries (as this version of the graph does), one of the countries with the worst social mobility is the United States, which is famously open (or used to be) to immigrants and foreign capital. At the other end, the countries with the best social mobility are predominantly the Scandinavian ones, and they are probably a mixed bag, being economically open (little protectionism, as I understand it) but not socially very good at, say, integrating immigrant populations.

For me, inequality still seems like the most likely cause, not least because the guy who put together the above graph, Miles Corak, has a convincing argument about how this works:

Socio-economic status influences a child’s health and aptitudes in the early years—indeed even in utero—which in turn influences early cognitive and social development, and readiness to learn. These outcomes and the family circumstances of children, as well as the quality of neighbourhoods and schools, influence success in primary school, which feeds into success in high school and college. Family resources and connections affect access to good schools and jobs, and the degree of inequality in labour markets determines both the resources parents have and ultimately the return to the education children receive. This entire process then shapes earnings in adulthood.

To return to Curtin’s final point, would reducing income gaps make any difference to the career prospects of a young Arab girl in a French slum? Perhaps not in that case, and I certainly accept the point that barriers to opportunity, as a separate matter to inequality, should be tackled. But in the wider picture, I would still say, yes, a more equal society will generally be one in which the group of people he describes will have higher incomes, better social support and generally stronger life chances.