One of the most serious issues facing New Zealand is the racial imbalance in our prisons. That was the view of Human FM, a Victoria University club of DJs, musicians and social justice activists raising awareness of issues  such as child poverty and climate change. Indeed the statistics are shocking: Maori make up 15 per cent of our overall population but more than 50 per cent of our prison population.

We decided to host a discussion about the issue, on the evening of Wednesday 25 September at Ramsey House, the university’s Anglican Chaplaincy, featuring five expert speakers, a presentation facilitated by Arts Access Aotearoa / Whakahauhau Katoa o Hanga, and music from Maori Television’s Songs From The Inside. The speakers were Kim Workman from Rethinking Crime and Punishment, Neil Campbell from the Department of Corrections, Susan Blaikie from the Arohata Aid and Rehabilitation Trust, George Kupa from Orongomai Marae Reintegration Services, and Tai Ahu of JustSpeak. The panel was chaired by Julia Whaipooti of Nga Rangahautira, the Maori Law Students Association at Victoria University. The event attracted around 40 students, recent graduates and members of the public. 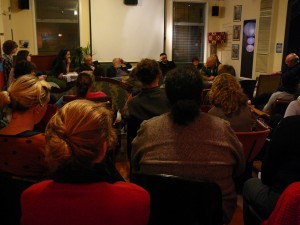 The audience at Ramsey House

The over-representation of Maori in prisons is an issue which concerns all New Zealanders, whether Maori or Pakeha, rich or poor. There are approximately 8,600 New Zealanders in prison at any given time, and these people are first and foremost individuals who were nurtured in our communities and who will eventually be returning there. If we want to make our communities safer, happier and more equal, we need to take notice of this issue and work in a community setting to tackle it. Susan Blaikie spoke about people having a communal identity and only being able to heal in a community context. Neil Campbell explained how the Corrections Department is partnering with community organisations and iwi to affect change, and George Kupa spoke about the need to educate our communities. For example, people may not realise that they are inadvertently staring at former inmates in the streets, and this can be misinterpreted. All these little things need to be taken into account, for together they can make a great difference.

Another major question was that of identity. Over the years, the speakers argued, many Maori have been alienated from their cultural history and way of life, a trend which was particularly evident in the wake of rapid urbanisation of Maori from the 1950s onwards. This resulting marginalisation and disconnection from traditional iwi and hapu has led to the disproportionate representation of Maori in lower socio-economic sectors of society and their higher rates of both victimisation and offending. Unfortunately, this situation has been normalised and criminal behaviour is now often connected with Maori. “What kind of message does this send to Maori youth?” Tai Ahu asked. Maori lose their identity – for example, as a Maori mother and Christian – and internalise the message that they are destined for a life of crime. The prison experience negatively affects a person’s mana and tapu and their very ability to control their own being.

The speakers also pointed out that New Zealand society is more punitive than many other OECD countries. Although our crime rate is falling, we continue to incarcerate more and more people; the length of sentences has increased by 50 per cent in the past ten years. The irony here is that studies show that the longer people are kept in prison, the more likely it is that they will reoffend. In addition to punishing people when they are in jail, we punish offenders once they have been released. It is notoriously difficult for a New Zealander with a criminal conviction to find voluntary work, let alone paid work, and former inmates face barriers to accessing student loans, state houses and insurance schemes. As Kim Workman noted, “Punishment is necessary, but it must be proportionate.”

Rather than continuing down this highly punitive pathway, New Zealanders would do better to take into account the principles of grace, forgiveness and redemption. Susan Blaikie spoke about the power of rehabilitation. Currently, prisoners cannot be rehabilitated until 90 per cent of their sentence has been served, delaying an experience that can be truly transformative. George Kupa talked about the reintegration services offered at the Orongomai Marae, encouraging prisoners to identify their potential and helping them develop skills in areas such as literacy and numeracy. Art classes in prisons can also play a unique role in teaching prisoners that they have talents to develop, allowing them new forms of self-expression and offering them creative alternatives to re-engaging in crime after release. Neil Campbell explained that Corrections now has a specific goal of a 25 per cent reduction in prisoner reoffending by 2017 and a four-phase plan to achieve this target.

This will be an ongoing debate, led by organisations such as Rethinking Crime and Punishment, which advocates prison reform. JustSpeak, its youth branch, is currently working on a report, ‘Beyond Prisons’, making recommendations to government for improving our penal system. One recommendation would be to redirect resources from imprisoning people (which costs about $90,000 a year) to more effective rehabilitation and legal aid services.

More generally, as the Russian novelist Fyodor Dostoevsky famously said, “The degree of civilisation in a society can be judged by entering its prisons.” We must fully grasp the complexity of this issue and work together, with government, community organisations and iwi, to resolve it.

Emily Watson is a Victoria University student in the second-year of her LLB/BA. As well as Human FM, she is involved with Amnesty International and the Red Cross.