New data shows how the government’s Budget last year took a huge amount of heat out of inequality as a political issue – though it may not have changed the long-term pressure very much. 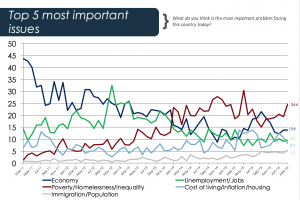 A previously unpublished poll by UMR shows that the proportion of people listing poverty and inequality as ‘the most important problem facing this country’ fell from 30% just before the 2015 Budget to 20% by late last year – a fall of one third.

This is backed up by figures in the Roy Morgan issues tracker, which displays a similar fall.

This isn’t all the government’s doing: partly what this picks up is people getting more concerned about the state of the world economy, dairy prices and so on, and privileging that over inequality.

But the sharp fall also strongly reflects the way that the 2015 Budget’s key announcement, a $25 a week increase in benefits for households with children, has convinced a lot of people that the government is doing ‘something’ about the problem.

People who have spoken to ministers say they think they have now ‘defused’ the issue. The move may also explain why, as Brian Easton noted earlier this year, Stuff’s list of political issues to watch out for in 2016 ignored poverty and inequality. With the issue having receded so much by the end of last year, it would have been tempting to write it off.

But UMR’s polling shows concern about poverty and inequality picking up again since late last year and approaching previous heights. As indeed it might. While the $25 increase was welcome, most families in poverty are more like $100-200 a week short of what they need to afford a decent life for them and their children.

Experts such as Prof Jonathan Boston described the 2015 Budget move as having a ‘marginal’ impact on poverty, and this polling suggests the public may ultimately agree. The government’s move has protected them cleverly: it may even be enough to stop voters from deserting them on that issue. But such temporary inoculation doesn’t make the issue go away in the long-term. Defusing the issue now is not the same as defusing it for ever.