I’ve just come across this graph about who gets to go onto higher education in developed world countries – and it seems to make pretty damning reading for New Zealand. 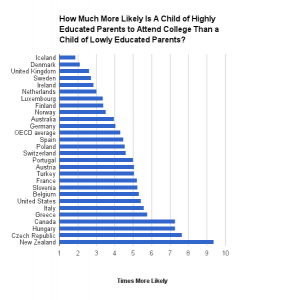 Basically, it suggests that if you have highly educated parents, in this country you are nearly 10 times more likely to be in higher education – university, polytechnic or ‘college’ in American-speak – than someone whose parents are not highly educated. That’s the worst ratio in the developed world, by a long chalk.

Data can be flawed, of course, and we have to ask ourselves, does this seem likely? It is true that the data for New Zealand doesn’t include some qualifications that probably attract more students with poorly educated parents, making our ratio seem worse than it really is. But that is also true for the United States, Canada and Australia, and they all seem to be doing far better than us on this data.

It seems hard to believe that we could have a worse record than the United States, where tertiary education is so expensive. But they do compensate for that with scholarship schemes far more extensive than those here. (Not that I’m necessarily recommending scholarships as the way to counteract socio-economic disadvantage.) So it’s still plausible.

Assuming the data are correct, then, how is the influence influence transmitted from parents to children? Probably not through tertiary education as such. The advantage will be gained because the children of better educated parents will have a better start in life, and thus do better at primary and secondary school, setting them up for later educational success.

And we know that 70-80% of children’s attainment at school can be explained by their socio-economic background, with just 20-30% influenced by what happens within schools. So this data looks like further evidence for doing something about poverty in New Zealand.

UPDATE: The Ministry of Education has responded with the following information, from Claire Douglas, head of graduate achievement, vocation and careers:

Education is central to inter-generational mobility. Unfortunately this data  doesn’t present an accurate picture of the role tertiary education plays in New Zealand.

The graph does not compare apples with apples, with the result that New Zealand’s inter-generational mobility is underplayed.

The graph originally comes from the 2012 OECD publication Education at a Glance. The results for most of the countries came from a survey run by the OECD.  But for some countries – New Zealand, Canada and the US – the results came from a separate survey,  the Adult Literacy and Lifeskills (ALL) survey in 2006.

In most countries, the question asked if university graduates’ parents had attended university.  However for the ALL survey used to generate results for  NZ, Canada and the US, the questions asked if the university graduates’ parents had had tertiary education of any kind. This  included those with trade qualifications and diplomas. That meant  for these three countries, a wider group of parents were counted as having a tertiary qualification. That in turn diminishes the pool of university students counted as coming from households without qualified parents, and thus a lower OECD ranking for mobility.

That difference in the survey used means that inter-generational mobility for NZ, Canada and the US shows as much lower than it would had they participated in the main OECD survey.

The results particularly skewed New Zealand’s rankings because we have had, over the years, the highest proportion of our population who had non-university tertiary education.

Which are all reasonable points, and were acknowledged in the original post to some extent. The question is how much does difference does the nature of the survey make? The ministry is saying it shows mobility “much” lower than it really is, but the OECD obviously doesn’t think it makes a material difference. In addition, as noted above, the other countries also affected by this bias still have far, far higher mobility rates than us, so the problem remains.

One comment on “Are New Zealand’s universities the most elitist in the developed world?”