When I raise the point that New Zealand has become much more unequal since the 1980s – faster than almost any other country – one of the common responses is: yes, but we’ve made so much social progress since then. Outcomes for traditionally disadvantaged groups have improved as we’ve become a more tolerant and modern nation. Are you arguing that we should go back to the days when – say – women and Maori had far lower status than they do now?

What you see immediately is that although incomes for both groups were improving (albeit slowly for Maori) from the 50s through to the 80s, that progress has now stopped, or even gone into reverse slightly. Both groups were catching up with Pakeha men until the mid-1980s; since then, they have made no gains. 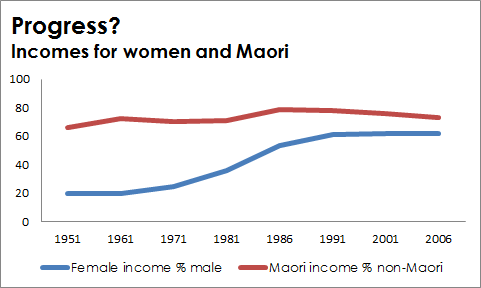 This is not to deny the progress in the cultural and political fields, where – for instance – recognition of Maori culture is far greater than it was. But when it comes to incomes, at least, those gains have been outweighed by brute economic and political factors: the wrenching structural adjustments in the 1980s that saw Maori unemployment soaring, for instance, and the increasingly punitive approach to low-income families, which often hits hardest on women.

Economically, at least, the current system isn’t delivering for women and Maori, any more than it is delivering a fair share of incomes among the wider population.