The rich don’t really pay that much in tax – and to the extent that they do, it’s because they get the biggest chunk of the income

Politicians sometimes like to say that the richest households pay three-quarters (or some similar amount) of all the “net tax” .

The problem with this measure is that it isn’t really about tax. It does start with the amount of income tax paid by different groups – but it then does complicated calculations about how much those groups received in benefit payments, the accommodation supplement, paid parental leave and Working for Families. Those figures are subtracted from the amount of tax paid by each group, to arrive at a sort of “net financial contribution to the government’s books” measure.

More useful figures about income tax are in the graph below, which shows how much of our national income goes to each of the country’s ten income groups – and what proportion of the total tax take they contribute. 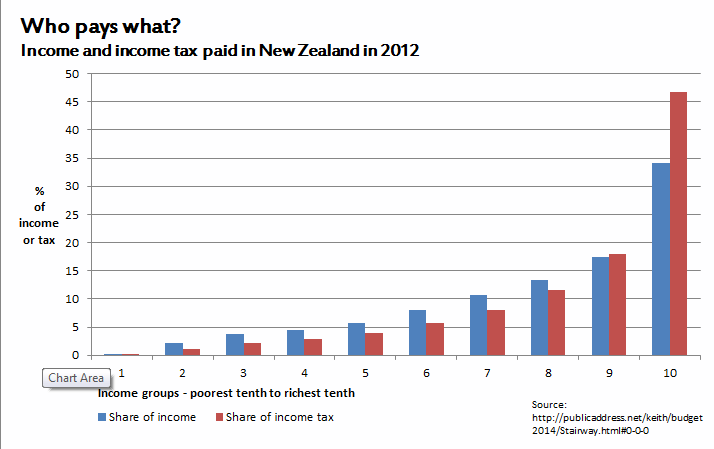 In 2012, the richest tenth of New Zealanders paid 47% of all income tax, but that’s hardly surprising given they earned 34% of all the income. Declared income, that is – a lot of income for the wealthy gets hidden in various ways. (To learn more about the way income and tax paid are distributed, have a look at this very clever interactive graphic).

But even that doesn’t give you the whole picture, because it’s only measuring income tax, and leaves out two other key parts of the tax system: GST and capital gains.

It’s also better to look at what proportion of their income people pay in tax, rather than just the amounts, so as to avoid simply saying that the rich pay the most tax because they earn the largest incomes.

The graph below, looking at how much of their income different groups pay in income tax and GST combined, shows that the very rich don’t pay that much more of their income in those taxes than the poor do. That’s even though the wealthy have benefited the most from New Zealand’s health system, schools and other infrastructure, and can most afford to pay for those things to continue. 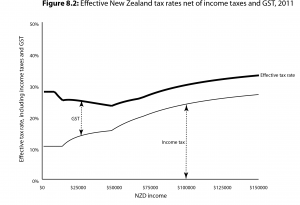 None of these figures, of course, includes capital gains (income made from selling assets such as houses and shares), because we don’t for the most part either tax or record those capital gains. When those are included, Inland Revenue research shows the rich pay less of their income in tax than the poor do.