Following the announcement that the Green Party’s Russel Norman would be stepping down, to be replaced by Marama Davidson, I did this chart of Parliament’s gender breakdown. 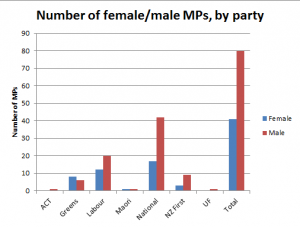 It doesn’t make pretty reading.Only the Greens have more female MPs than male. Labour have 12 female MPs to 20 male (although if they had won more seats, their list was designed to get pretty close to gender parity at around the 40-seat mark). National have 17 female MPs to 42 male. New Zealand First has three female MPs out of 12 in total.

Overall, just 41 of the 121 MPs are female – almost exactly one-third.

Responding to this graph on Twitter, National Party member Hamish Price said the answer was to do a serious outreach campaign to women who could stand for Parliament but don’t because it seems like a forbidding and complex process.

The response from the other side of the debate would be that such outreach is all very well, but doesn’t address the deep-seated sexism that exists in politics and which blocks women from getting into electable positions.

It’ll be interesting to see where that debate goes.